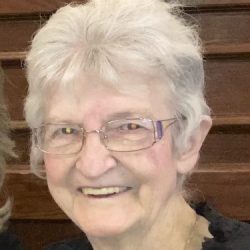 Renate Gill (née Doyen), age 83, beloved mother and “Omi” passed away peacefully at home on Tuesday August 2, 2022. The only child of Menno and Irma Doyen, Renate was born on August 26,1938 in Bremerhaven, Germany. World War II broke out just after Renate’s first birthday and she spent the next six years of her life under the shadow of war, sleeping with her shoes on so she could be rushed to an air shelter at a moment’s notice. Sometimes seeing aircraft so low she could make out the pilot’s faces, she and her mother were once caught in an air raid at a train station. Her mother had to shield Renate from a wall of flames with her coat as they dodged bomb craters. After the war, life gradually returned to normal. Renate went to school at the Humboldtschule, completing a curriculum in business administration. Her favorite pastime was going to the movies and watching old American films (a passion she passed on to her young son Stephan when she roused him from bed to watch a Gene Tierney- or Godzilla- movie with her). Renate spent many Saturday afternoons with Errol Flynn, Douglas Fairbanks Jr, and most of all Clark Gable. In the late 1950s, while working at a US military base, Renate met a young airman named Edwin Bugenhagen, whom she soon married and joined as he returned home to the US. With visions of the New York and Chicago skylines in her head implanted there by her movies, Renate was somewhat shocked to be confronted by the reality of endless cornfields in Edwin’s home state of Iowa. With ambitions for more than small town Iowa could offer, she “encouraged” Edwin to go to college while she worked and began raising their family. Eventually, the family settled in Rochester, NY where Renate continued to work part time doing administrative work while raising her two children, Stephan and Kirsten. In the mid 70’s while working at Taylor Instruments, she met Daniel Gill, who was to become her second husband. Renate and Daniel continued to live in the Rochester area for the next 50+ years. Renate became an administrative assistant for the New York State Insurance Fund for over 20 years, known for her tremendous organizational and administrative skills, as well as her German work ethic, she was affectionately known as “Sarge” by the other admins. She managed her home in the same disciplined, efficient manner, always on top of finances and never paying a bill late. It was noted by the medics, at the time of her passing,  that she managed to have all the bills paid and perfectly organized. After retirement, she spent a great deal of time with her grandchildren (her pride and joy!) and was a beloved Omi to all of them. She also was overjoyed to have had the opportunity to be a great grandmother to Logan and now with Ella, the most recent arrival in the family.  Renate is survived by her children Kirsten and Stephan, daughter-in-law Annie, beloved grandchildren Krista ( husband Collin), Bryan ( wife Kimberly), Matthew, Jordan (Rachel Ferrara) ,along with her precious great grandchildren Logan and Ella. She was predeceased by her husband Daniel. The immediate family will join in remembrance of Renate at a private graveside service. Expressions of condolence can be sent to:  Kirsten Carey 64 Ledgewood Drive Rochester, NY 14615. Memorial Contributions can be sent to St. Jude’s Children ‘s  Research Hospital PO Box 50 Memphis TN 38101-9929. WEBSITE