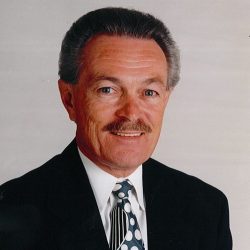 Bill was an Eagle Scout, Troop 56, Otetiana Council. He graduated from John Marshall High School in 1961and immediately enlisted in the United States Air Force. He proudly served his country as an active member of the military for four years and as a reservist for two years. Bill received a Letter of Commendation for his service as a radio operator in the European Security Region during the Cuban Missile Crisis. His service led to being an avid HAM radio operator generating friends around the world.

After leaving the military Bill became the first manager of the iconic Century Liquor Store in Rochester, NY. He then launched his successful sales career at Lawyer’s Cooperative Publishing Company in Rochester, NY. He found his calling as a medical and surgical instrument salesman for Miltex Corporation of New Jersey. As Vice President of Miltex International Sales, he successfully expanded Miltex’s business throughout Europe, Asia and South America retiring in 2010.

Bill and Joyce resided in West Palm Beach, Florida from 1982 to 2021. He was an avid salt-water fisherman and golfer. He and Joyce were members of Mayacoo Lakes Country Club and Bill was extremely proud of his two hole-in-ones.

Bill passed peacefully surrounded by his loving family. We are truly grateful for the outstanding care provided by the FF Thompson Hospital third floor medical staff and the staff of the Skilled Transitional Unit at MM Ewing Continuing Care Center.

There will be a private service for family and friends. Donations are gratefully appreciated to the Aab Cardiovascular Research Institute at the University of Rochester Medical Center.