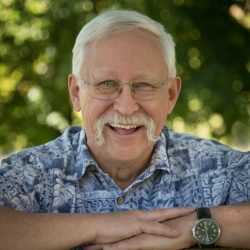 He is survived by his wife of 49 years Joan, and sons, David and Daniel (Micaela). He is also survived by his brother Garry Lindberg (Daryl) of Ottawa, and the extended Lindberg Family across Canada.

On May 5, 1949, Vern was born in Rimbey, Alberta Canada, the third son of Wilton and Irene Lindberg. Two older brothers, Dennis and Garry, welcomed him home to the farm. The Lindberg’s were “First Settlers” in Alberta; they cleared the land. They farmed 4-quarter sections – one square mile – with their sons. Vern celebrated his birthplace and that farm in his 2017 CD, “A Farm Boy’s Work.”

At the ripe old age of 16, Vern entered the University of Alberta in Edmonton. By age 20 he had earned a bachelor’s degree in Honours Physics. Graduate school beckoned and Vern chose Case Western Reserve University in Cleveland. Guitar in hand, a long train ride brought Vern across the country from Alberta to Ohio in 1969. The old Tudor Arms Hotel was the graduate dormitory. Vern made dozens of friends who were studying a variety of academic disciplines. In addition to studying physics, Vern and his guitar were welcomed at many a dorm room party. It was at the Graduate House that Vern met Joan Gray from NYC. The boy from the farm and the girl from the city were an unlikely match. But Vern and Joan fell deeply in love and married on June 23, 1973.

Vern’s Physics dissertation, completed under advisor Dr. John McGervey, was titled “Positrons as a Probe of the Solid State.” His research used positron tracing to investigate defects in metals that had been bombarded in nuclear reactors.

With a newly minted PhD, Vern began teaching at Hartwick College in Oneonta, NY.  After 4 years at Hartwick, a bigger city and a university beckoned. Vern started his career at Rochester Institute of Technology in 1979. During his 34-year tenure, teaching was Vern’s forte. In 1987, Vern received the Eisenhart Award for Outstanding Teaching. Students nominate professors, making this award all the more special.

The following is a quote from RIT News and Events, May 5, 1988:
Lindberg says he teaches because he truly loves it. ”I’m lucky; few people have the luxury of doing what really interests them… It’s a challenge and joy to see students learn, think and make sense of information.” He likes it when a student exclaims, “I didn’t know that!”
“I’m a ‘people’ person,” he says, “and I enjoy the one-on-one interaction with students, getting to know them and helping them get over their hurdles.”
He also likes to have fun and establish rapport with students outside the classroom. One year he chastised a group of students for not being resourceful enough to know it was his birthday. Later that day they brought him three chocolate bars. The next year they decorated his office and gave him a bigger chocolate bar. Their senior year, Lindberg was working at Kodak on his birthday, and they called his wife to alert her that they were going to come by the house that night. “Yes,” he says, “they brought me a solid bar of chocolate – 1 inch thick, 18 inches long and 12 inches wide.”

Vern loved his time at RIT, postponing retirement to help with RIT’s transition from quarters to semesters. He counted so many of his RIT colleagues as dear friends. In true Lindberg style, he wrote a song about RIT and made the guests at his retirement party join in the chorus.

In 1980, Vern and Joan bought a lovely American Four Square house on Highland Avenue. The Lilac Neighbors surrounded that Highland Avenue house. Together the neighbors welcomed the stranger, celebrated good times, and comforted the sorrowful.

Music played a steady beat in Vern’s life. Shortly after arriving in Rochester, Vern joined the Golden Link Folksinging Society. He found mentors and encouragement at the Tuesday night sing-around. Practicing a new song each week grew his calluses and strengthened his voice. Vern accepted various roles within Golden Link. His organizational skills brought success to each role – festival chair, newsletter editor, president, and treasurer. Vern shared his many talents with Golden Link for over 40 years.

Fatherhood shifted Vern’s attention from folk music to family. David Michael arrived from South Korea in 1986. Four years later, Dave waited at Kennedy Airport with Mom and Dad to welcome a new baby brother, Daniel Bernard. Now the Lindberg’s had Canadian, American, and Korean countries to cheer for in the Olympics.  The house at 32 Highland hummed with love and laughter. Squeals of “Daddy’s Home” greeted Vern after a long day at RIT. The boys would hurl themselves into Vern’s waiting arms at the bottom of the stairs. He never missed.

Having never played the sport, Vern became a youth soccer coach. His teaching and research skills kicked in. He studied rules, plotted drills, and charmed his players and their parents. Vern patiently watched the boys improve year after year. The parent – child soccer match was the hilarious highlight at season’s end.

With the boys, the Lindberg’s joined a family of families: Seton School and McQuaid Jesuit. Lifelong friendships took root at these schools. The boys enriched Vern’s life with layer upon layer of love. They were smart, quirky, energetic, and fun. They were Korea’s gift to the family.

Over the years, vacations brought Vern and Joan to Utah, Nova Scotia, Alberta, the Scottish Highlands, the West of Ireland, and Portugal. Winter trips found them in Florida visiting Dan and his girlfriend Micaela Hernandez.

On June 25, 2022, friends gathered in Chicago to celebrate the wedding of Dan and Micaela. Vern wrote and performed the song “Cancion de Mica y Daniel” – in English and Spanish – to commemorate their marriage. Vern sang and danced and laughed at the wedding.

Vern’s was a life well lived. It ended suddenly and too soon, leaving all of us wanting more.
Remember his smile, his beautiful blue eyes, and his enormous capacity for love.
Tell each other Vern stories. Laughter will ensue.
Dan reminded me of the Jesuit tradition that he learned at McQuaid – to become men for others.
Vern was a man for others.
May he rest in eternal peace.

A Service in Celebration of Vern’s Life will be held on Monday, October 3rd at 10AM in the Interfaith Chapel of Miller Funeral and Cremation Services, 3325 Winton Road South. 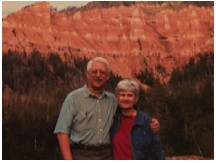 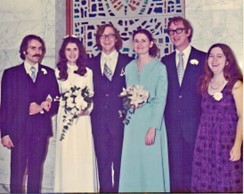 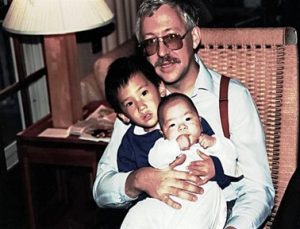 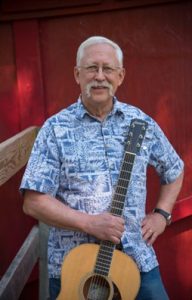 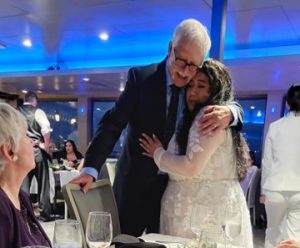 Vern and his “nuera,” Micaela Lindberg