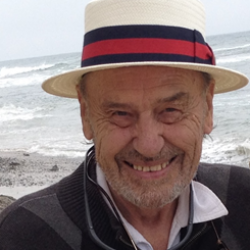 Octave Naulleau, 88, passed away suddenly on October 11, 2022. Born in the Vendée region of France, Octave was the eldest of four siblings. He obtained an advanced degree in literature from the Université de Poitiers. While working as part of a NATO presence in Germany in the 1950s, he met his future wife, Margot, who was working as a translator. They married in her native Germany and had three children. In 1968, when a colleague in the United States offered him a job teaching French at Nazareth College, he agreed to give it a try “for a few years.” He ended up teaching for 42 years in the French Department, setting up and administering for 40 years Nazareth’s study abroad program at the Université de Haute Bretagne, in Rennes, France, a Sister City of Rochester, NY. Upon his retirement, he became Professor Emeritus. Octave’s passion for bringing cultures together and sharing his many artistic and literary interests was keenly felt by all of his students and many friends. Octave cherished learning and interesting conversation. His generous spirit and originality will be remembered by all those whose lives he so deeply touched. Predeceased by his wife, he is survived by his children Béatrice (Brad), Patrick (Victoria), and Pascal, and his grandchildren, Margaux, Corinne, Leia, and Hana.
An informal gathering will be held October 24, 3-5 pm, at the French House, 4245 East Ave., Rochester. In lieu of flowers, consider donating to a charity of your choice in Octave’s honor.