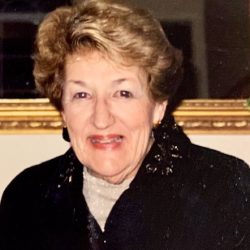 Ann was an amazing woman who led with her heart and openness to everyone. She was deeply committed to her family and Catholic faith and always put others before herself. She had a strong spirit of light and goodness that radiated in a way that resonated with so many people. She was extroverted, kind, thoughtful and open minded. She wanted to live to see a female President or Vice President in the White House and while visiting her for her 100th birthday, we were able to tell her about our new V.P. Kamala Harris. This made her happy.

Ann was born in Elmira, New York in 1920 to Daria and Andrew Colucci (Colocucci) from Saludecio, Italy. Ann’s brother, Andy was able to trace the family Colocucci lineage to 7 generations. We were fortunate to have been able to visit the family grave sites in Saludecio Italy tracing back to familial ancestors in 1834. She had 7 brothers and sisters. Coming from a large Italian family, she always told us how the 4 oldest siblings helped raise the 4 youngest. She loved spending time with her grandchildren, Warren, Logan and Annalise and all of her adopted grandchildren (Blaise and Erin Tartaglia, Becky and Beth Billen); and all her nieces and nephews that she was so close to!

Ann worked in the Rush-Henrietta school district as a teachers aide for many years and would come home and share stories about the kids in her classroom. This was a great source of happiness and pride for her. When Ann was 85, she moved to the Erie Station Road Legacy Senior Living where she assumed a role as an “Ambassador” – the perfect role for such an extroverted, gracious women!

Ann’s husband, Guy, worked and retired from Kodak in 1986 where he worked as an Engineer. Guy passed away in June 2007. Interestingly, we learned in 2010, 3 years after Guy had passed away, that he was part of Kodak’s top secret NASA telescope division. The telescopes were likely used as spy satellites and built for reconnaissance during the Cold War. The telescopes have been declassified but are still protected by NASA. Guy passed away keeping his work completely confidential from Ann and his family as required by his position. He traveled without being able to tell Ann where he was going or what he was doing. Ann was dutiful, committed and a loving wife and mother.

We cherish our mother’s memories and pray for her kindness to be shared in generations to come. Donations in Ann Bianco’s name can be made to Inmed.org to support families and children in need during the Covid crisis.