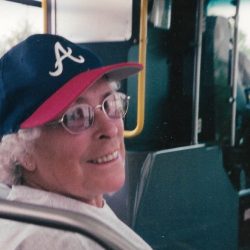 Dorothy played basketball in high school and for Taylor Instruments in the 1940s – in her early adult life, she kept extremely busy raising four children and was active in her neighborhood leading March of Dime drives and Girl and Cub Scout troops – she put herself through nursing school in the 1960s, while working fulltime and began her “second” career as a Licensed Practical Nurse – Dot was an LPN at Strong Memorial Hospital and the State Hospital in Monroe County and a charge nurse at several nursing homes in the area before becoming employed by the Veteran’s Administration – her years with the VA included the Canandaigua and Nashville, Tennessee VA hospitals, where she became an avid Atlanta Braves fan – she loved (old-time) country music, polkas and playing cards and bowled in several leagues in her 50s and 60s and even tried her hand at fishing.

She leaves two sons, James McDonald and Daniel McDonald, a daughter, Catherine Schramm, a sister, Margaret (Dan) Brunson, fifteen grandchildren, many great-grandchildren, nieces and nephews and her dearest friend, Dolores (Dee) Cauley (and their two cats, Boxer and Tinker) – due to the pandemic, the family will have a private interment with a celebration of Dot’s life at a later date.