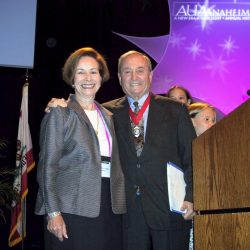 *photo: Irwin Frank as president of the American Urological Association in Anaheim California, with wife Marilyn and granddaughters Amy and Rachel.*

Passed away peacefully after a brief illness on October 18th at the age of 93. Irwin is survived by sons Gary (Lisa), Steven (Robin), and Larry (Eric); brother Bertram Frank; and granddaughters Casey, Amy, and Rachel Frank. He is predeceased by his wife Marilyn of 63 years. The second of 2 children, Irwin was born to Harry Frank and Bess Smalline in Rochester New York on March 24th in 1927.

Irwin graduated from Franklin High in 1944 at the age of 17. He immediately enlisted in the Navy, serving in the South Pacific until 1946 as a radio operator and repairman. Following his service, he enrolled at the University of Rochester on the GI bill and continued to study and work at the university for the next 74 years. Medical school started in 1950, internship and residency in 1954, after which he joined the Department of Urology. Over his career, he served as department chair and then Chief Medical Officer and Senior Associate Dean of the University of Rochester Medical Center.

Irwin rose to international prominence within Urology and was elected President of American Urological Association, among numerous other roles and honors in patient care, hospital service, national oversight of healthcare, and international development of medical treatments and research. He helped to set health care standards in the United States by serving for over a decade as the surgical representative on the executive board of the Joint Commission that reviews and certifies health care facilities.  He was widely known for his authorship of chapters on Urology in most of the leading textbooks and manuals and for his academic contributions as Professor of Urology, serving as Emeritus Professor until his death.

Irwin maintained a very active medical practice through all of the academic writings and positions of service, always emphasizing patient care including the family of those who were sick. Irwin was widely admired for making the extra visit to the hospital on a Sunday or a call to check on his patients and their families and to make sure that everything was being done right. Above all, he felt his greatest legacy was through his teaching. He trained dozens of urologists who now practice throughout the world and influenced thousands of medical students who passed through his tutorial on how treat both the disease and the patient.

Irwin had an exceptionally rich parallel life as an active and widely known member of the Rochester community and as a partner of Marilyn, his energetic and accomplished wife. They were at their very best in their joint ventures, where their talents and mutual respect complemented each other so well. Marilyn rebuilt the Rochester Kidney Foundation as Executive Director and was also a founding member of Friends of Strong (Hospital), and while Irwin was involved in various leadership roles for the American Urological Association and the Joint Commission, Marilyn organized major fundraising events for Urology that included entertainers such as Bob Hope, Harry Belafonte, Tony Bennett, and many others.

Irwin enjoyed socializing and playing golf and tennis with their vast network of lifelong friends. He loved movies, music, had a razor wit, a large store of jokes, and had great timing and delivery. When asked if he had heard some comedian’s latest routine, he was likely to answer that he had already listened to that record several times, followed by some of the best lines.

Irwin will long be remembered by his two parallel families, on one side his children and grandchildren, and on the other side his colleagues and students. Above all, he loved and admired those who made a difference with their lives as he had done so well with his. He took great pride and joy at the accomplishments of all his family members and was known to take time to listen and to help others.

Please send any donations to honor Irwin to the Department of Urology at the University of Rochester Click HERE to Donate.
In respect of the health and safety of all during the pandemic, the family has decided to have a private ceremony. A celebration of Irwin’s life will be announced at a later time.