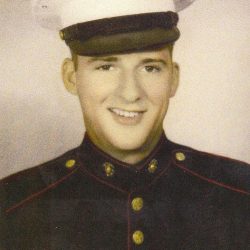 Ken was born in Beaverdale, PA. The son of John and Mildred Wilson. He was predeceased by his parents, Brothers Jack, Bob, Lynn and Sister Mary Margaret. After attending school in Beaverdale and working in the coal mines, he left to join the United States Marine Corps where he served for eight years. His time in the Marines left an indelible impression on his life and is also where he met another Marine Roberta (Bobbi) Bittinger who became his wife and the love of his life for the following 67 years.

Ken had a lifelong dream of opening a family auto parts/machine shop business (Wilson’s Village Auto Supply) which he operated for fourteen years. He went on to become Victor Town Supervisor in 1982 and was elected to seven consecutive terms and also served as Chairman of the Ontario County Board of Supervisors for three years. He eventually retired from public service in 1995. He was a lifetime member of the Victor Fire Department and past president as well as a member of the Victor Rotary Club, he was also a member of Milnor Lodge #0139 and a member of American Legion Post #931.

Ken was many things to many people. He was a great husband and loved his wife “Bobbi Jo” dearly. He was a father figure not only to his two sons and grandson. He gave people chances and support, helped whenever possible, was generous to a fault and had everyone’s best interest at heart. He was also a tough task master and was never afraid to speak his mind whether you wanted to hear it or not. He faced challenges head on and never shied away, but also had a wicked sense of humor and a dry wit. Many were the times when you didn’t realize until later that you may have just “been had”. All this adds up to a man that was passionate about family, friends and all members of the community. He is greatly missed and will continue to be for a very long time.

Bobbi Wilson and family would like to extend a heartfelt thanks to the Ontario Yates Hospice and especially to two wonderful care givers Pam Mills and Pam Fenik. Their loving efforts never failed to make Ken smile and made his last few days much more bearable.

In lieu of flowers, memorials may be made to the House of John (Website)