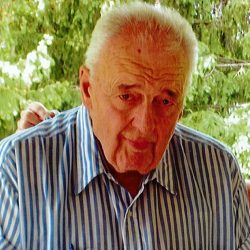 He was predeceased by his sister, Patricia “Tootie” Pulsifer; parents, Leo “Slats” and Dorothy “Dot” Porter; and brother-in-law, Edward Pulsifer.

Leo was born in Burlington, Vermont.  He loved New England and spent many summers waterskiing in New Hampshire with his sister.

Post high school, Leo played semi-professional basketball with a Vermont traveling team before joining the Air Force.  While in the service, he met and married an officer…the future mother of his five children.

Leo worked many years as a salesman for companies including 7-Up and Alberto-Culver throughout New England and New York. His work brought him and his family to New York from Massachusetts in 1967.

Leo was an avid reader, and in his most recent years enjoyed time with family….grandchildren, and sweets!  He loved his cherry pie and chocolate chip cookies!

A private military service will be held at Maplewood Cemetery in Henrietta.

In lieu of flowers, memorials may be made to Veterans Outreach Center Website.