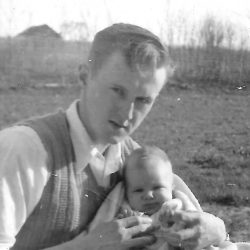 Sven Aage Sealander, Jr., 90, of Cranberry Lake, NY, and formerly of Ulster, PA, went to be with the Lord on the 17th of December, 2020 at Saint John’s Home in Rochester, NY.

Sven was born on March 2nd, 1930 in Norwalk, CT, the son of the late Sven A. Sealander, Sr. and Ella Oberg Sealander who had both immigrated to the United States from Denmark and Sweden.

After graduation from RPI, Mr. Sealander married his college sweetheart from White Plains, NY, Ruth Violet Hill.  One week later the two of them departed for Pennsylvania where Sven began a 34 year career as an engineer and plant manager at the former Sylvania Metal Products Division in Towanda, PA.  The young couple raised their family in Ulster where Mr. Sealander became a pillar of his new hometown becoming well known for his volunteerism and community service.  Sven served as an Elder in the Ulster Village Presbyterian Church and Superintendent of the Sunday school for 25 years.  Sven served as chairman of the Ulster Municipal Water Board where he oversaw the installation and operation of the municipal water system.  He served on the school board of the Athens Area School District as well as the Ulster Village Chamber of Commerce.  He served as chairman of the Ulster Waterskiing Show which was held annually at the Susquehanna River.  Sven spent countless summer hours teaching the youth of Ulster how to waterski.  After church services during football season, Sven hosted the neighborhood football game in the side yard of his Ulster home and during basketball season, he spent several nights a week at the Ulster gymnasium involved in community basketball leagues for youth and adults.

Sven retired from GTE Sylvania in 1985 and started a labor of love building a retirement home on the shore of Cranberry Lake in the Adirondack Mountains.  Sven and Ruth enjoyed a lengthy retirement in the home he built while staying active in the Cranberry Lake community.  Sven continued his service to the Lord as an Elder at the Oswegatchie Baptist Church in Oswegatchie, NY where he would fill-in as the church’s pastor when needed.

A memorial service for Sven is planned for the springtime.