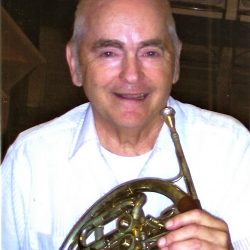 He was predeceased by his parents, Floyd and Lucy Comfort; brother Earle Comfort and sister Lucy Ann Comfort Killeen, and by his very dear friend Hilda Frediani. He is survived by his sister, Kathleen Shawl; brothers Webb Comfort and Lynn Comfort; several cousins, nieces, nephews and many dear friends, especially Tony Kemmer.

Wally was a proud US Army veteran. He was stationed at Fort Belvoir VA, and played in the Army Band. After his Army service he attended the Eastman School of Music in Rochester NY. He was a long-term employee of Stoney’s Parts Plus, but music was his passion.

Wally ate his bacon with a knife and fork and always brought the wine to holiday dinners.

Due to the COVID-19 restrictions a memorial will not be held at this time, but is planned for the spring. Contributions may be made in his memory to the Perinton Concert Band, P.O. Box 33, Fairport, New York 14450-0033, or at their web site www.perintonconcertband.org.